Network data from NetBlocks confirm a significant disruption to internet service in Sudan from the morning of Monday 25 October 2021 affecting cellular and some fixed-line connectivity on multiple providers. The incident continued until Thursday 18 November, when a significant restoration of service was observed on multiple providers in Sudan after 24 days offline. Social media restrictions remained in place until Wednesday 24 November.

Service came back and users began to post comments online shortly after a court ordered the arrest of internet provider CEOs who failed to restore internet access and Sudan’s state news network announced that service would return. It remains unclear whether the restoration will be sustained.

The disruption first came into place amid reports that senior government officials were detained in an apparent military coup. Mobile service was briefly restored on major operators around the 35th hour at 4:00 p.m. local time Tuesday, allowing some messages and videos to come through.

Metrics corroborate user reports of network disruptions appearing consistent with an internet shutdown. The disruption is likely to limit the free flow of information online and suppress news coverage of incidents on the ground.

⚠️ Confirmed: Internet partially restored in #Sudan on 25th day of post-coup blackout; real-time metrics show significant rise in cellular connectivity from ~4:30 pm local time; it is unclear if service will be retained, or for how long 📈

The internet disruption for the most part affects connectivity at the network layer and cannot be worked around with the use of circumvention software or VPNs. However, VPN services are effective at circumventing the social media restrictions in effect as of 18 November.

⚠️ Update: Social media and messaging platforms remain restricted in #Sudan on the 29th day of post-coup telecommunication disruptions imposed by the military.

The public's ability to participate online is a vital component of a free and fair society.

Social media metrics are taken from an initial set of 600 network measurements from a dozen initial vantage points across Sudan.

ℹ️ Update: Social media and messaging platforms have been restored in #Sudan on all major internet providers.

A day earlier, on Wednesday 17 November 2021, many of the remaining fixed-line telecommunications networks were cut for several hours during the most deadly protests to date.

Mobile internet was again disrupted exactly two months after the coup, on Saturday 25 December 2021, with service cut for some 16 hours ahead of planned demonstrations:

Internet service was cut again for many users on Thursday 30 December for approximately 10 hours as protesters gathered for a new round of anti-coup protests:

ℹ️ Update: Mobile internet is being restored in #Sudan after a day-long telecommunication disruption targeting anti-coup protests for the second time in a week; incident duration ~10 hours 📈 #Dec30March

On Sunday 2 January 2021, mobile data service was again cut for some 10 hours during protests against military violence following the coup:

ℹ️ Update: Mobile internet is being restored in #Sudan after a day-long telecommunication disruption targeting the first anti-coup protests of 2022 in #Khartoum; real-time metrics show incident duration of ~10 hours 📈 #Jan2March

A similar pattern of mobile internet disruptions was observed during protests on Thursday 6 January 2022, the first formally scheduled pro-democracy march of 2022.

Connectivity remained largely disrupted despite an order by the Khartoum general court to restore internet service following successful legal intervention by the Sudanese Consumers Protection Society and the Association of Sudanese Lawyers and Legal Practitioners. The military subsequently declared in a statement via Sudan’s Telecommunications and Post Regulatory Authority that its decision to stop Internet access “overrides any decisions from other parties.”

During the country’s longest recorded network disruption, Sudan cut social media for 68 consecutive days to quell protests, with Facebook, Twitter, Instagram and WhatsApp restricted from 21 December 2018 up until February 26 2019, according to NetBlocks internet measurements. A more extensive mobile internet shutdown left Sudan offline for 36 days from 3 June to 9 July 2019. 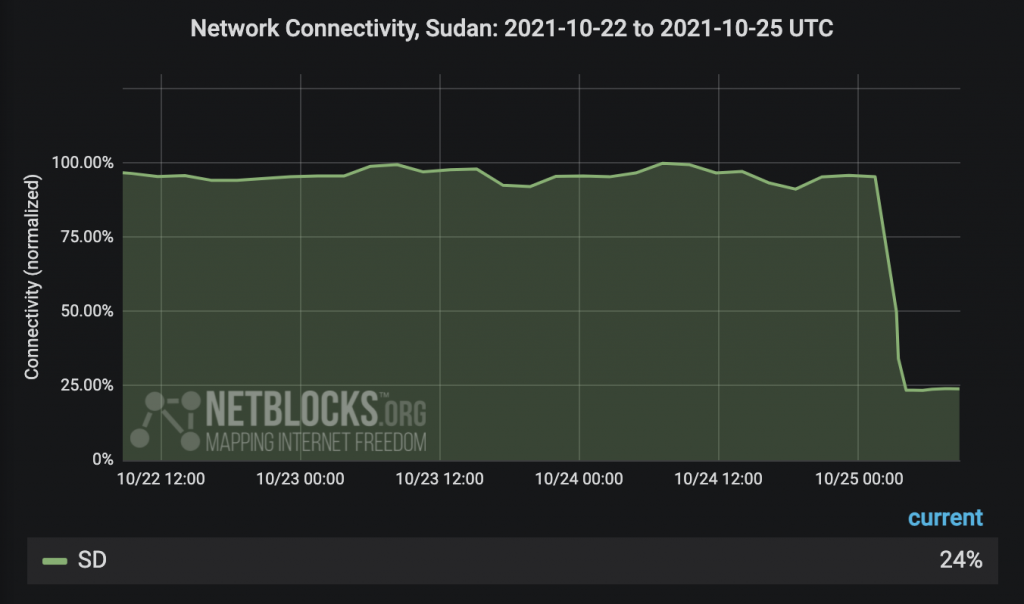 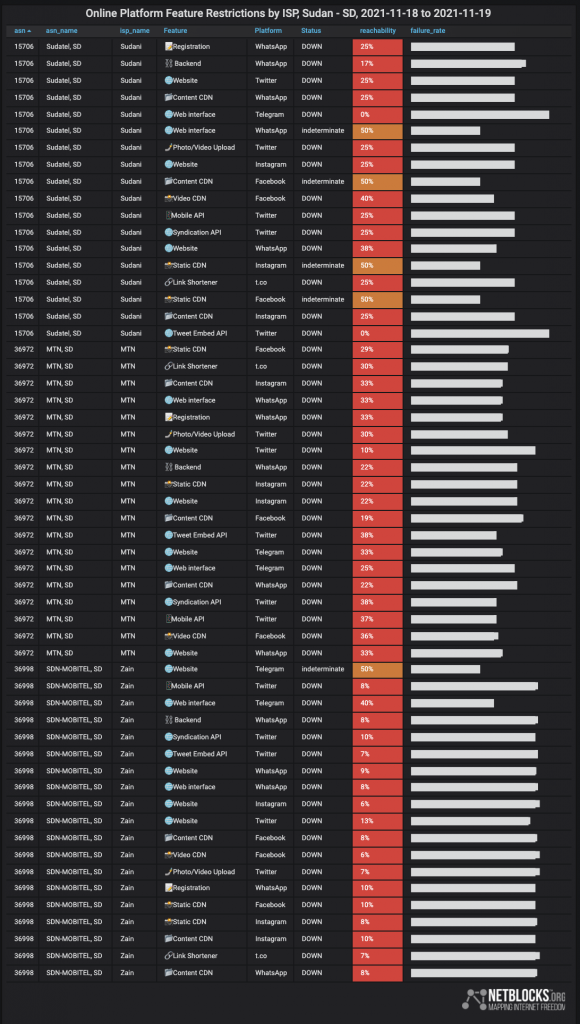