The outages have been widely reported by customers and come as the Army has been deployed in Ecuador with curfews ordered by President Moreno.

Which services are impacted?

Claro, one of Ecuador’s leading mobile operators, has been affected by the multi-hour regional outage.

Saturday’s Claro disruption has come in two phases. The initial disruption, beginning ~19:30 UTC, impacted much of Ecuador but had a short duration. Shortly after, the disruption was localized to Quito and has continued for several hours.

NetBlocks measurements corroborate reports from hundreds of users, as well as friends and family who have been unable to reach loved ones in Quito, who are reporting the cut through social media and online forums:

Why has Ecuador declared a state of emergency?

Protesters including indigenous groups and citizens affected by austerity measures have been on the streets protesting for several days.

However, events took a dramatic turn over the weekend with hundreds of arrests, the deployment of troops, several reported casualties at least one confirmed death. A national state of emergency was subsequently declared.

The network disruptions were identified shortly after videos were posted to social media showing armored vehicles rolling onto the streets of Quito.

In that instance, users resorted to circumvention tools to work around the restrictions.

On Tuesday, Ecuadorian President Lenin Moreno announced that his government will relocate from the capital city of Quito. The country has since introduced curfews in several regions.

We thank Fundación Karisma and the Association for Progressive Communications for continued assistance and background in the preparation of this report. 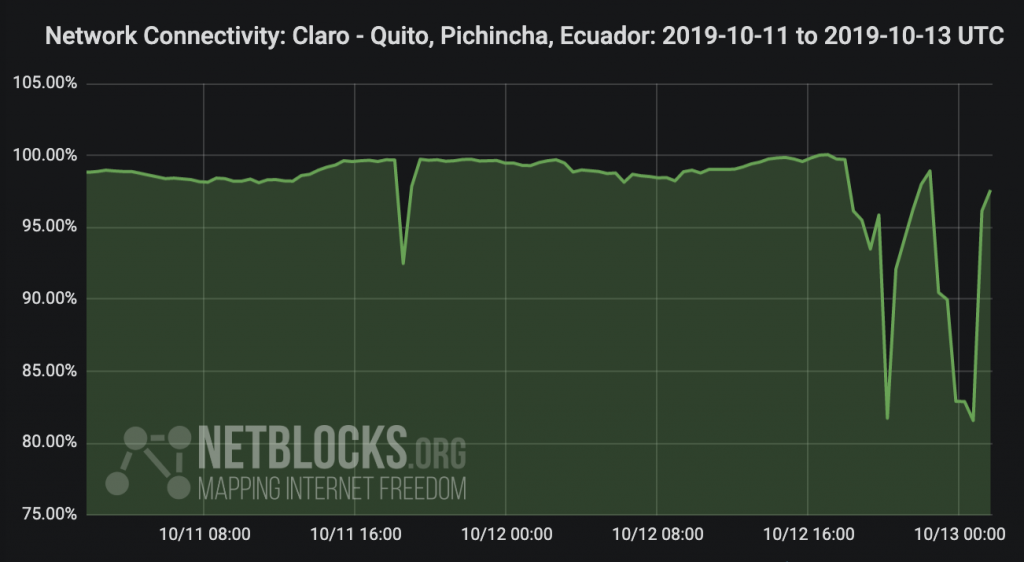