Twitter, Facebook, Instagram, Snapchat and messaging app WhatsApp have been blocked by internet providers in Liberia as of Friday 7 June 2019, according to real-time network measurement data from the NetBlocks internet observatory. The nationwide disruptions come as Monrovians take to the streets to participate in Save The State protests against alleged state corruption.

Update – 3:00 p.m. UTC: Liberia’s leading wireless internet provider Lonestar (AS37410) has restricted access to social media as well as Google’s Gmail service and news agency AP News, which covered this morning’s events and censorship during the Save the State protests in Monrovia. Network data confirms that the new censorship measure is targeted, while other news sites remain available to Lonestar subscribers:

NetBlocks data show that mobile internet provider Orange Liberia (AS37094) has implemented the restrictions, which are ongoing at the time of writing. The disruptions affecting ordinary operation of the social media platforms have raised concerns of a state order to restrict the Save The State protests in Liberian capital Monrovia, although no official statement has been made and the blocks are not in place with all providers.

Network measurements show that the websites and backend servers for the social media and messaging apps are entirely blocked, preventing the use of the services on affected mobile networks. Link shortening service t.co is also blocked, preventing the sharing of news articles and posts containing links to online content around the web, extending the impact beyond social media to independent platforms. Analysis of the data confirms that the restrictions are consistent with techniques used to filter online content.

The initial findings are drawn from a set of 500 NetBlocks internet performance measurements collected from six vantage points across Liberia in coordination with CIPESA and NetBlocks volunteers in Monrovia, in addition to a larger global control data set, providing a representative view of network performance and service reachability via multiple internet service providers. The findings have been further confirmed with a total of 1400 measurements from 12 vantage points as of 12:30 p.m. UTC, with an updated chart posted below including validated figures.

Each NetBlocks web probe measurement consists of latency round trip, outage type and autonomous system identity aggregated in real-time to safely and securely assess service availability and performance in a given country. 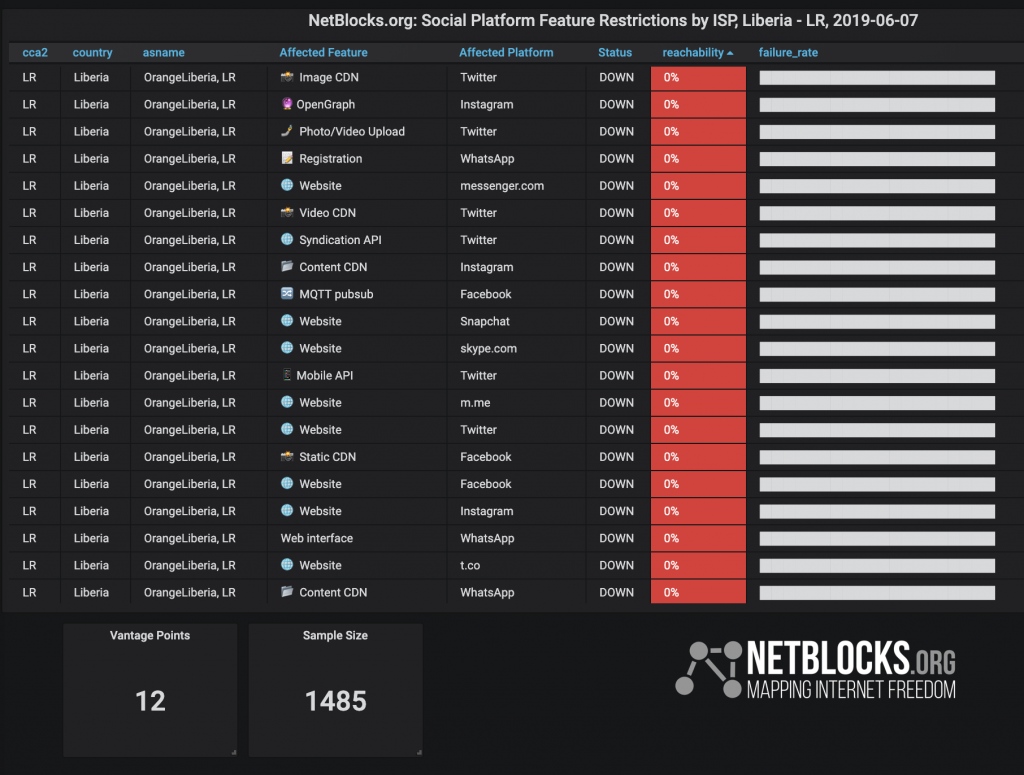