An extensive network survey by NetBlocks has revealed in unprecedented detail how internet controls are being used to block the Telegram messenger app and censor other services and news sites across several providers and 23 autonomous networks throughout Iran.

The blocking measures, implemented to quell a new series of protests beginning on 28 December 2017 have continued through the first week of January 2018. The NetBlocks survey extends beyond Tehran and major cities to also cover many provinces and reveals how the restrictions are universal across providers and consistently applied throughout the country. 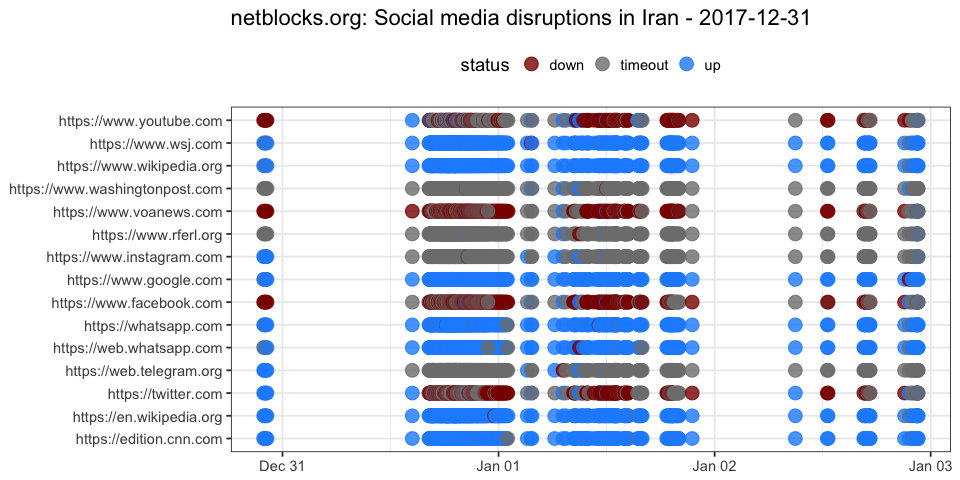 A further breakdown of the data, conducted using the NetBlocks web probes internet observation method, shows variations between how the blocks are implemented on different networks within Iran. The data comprises thousands of measurements taken from cities and population centres around the country, constituting one of the most thorough surveys of Iranian internet freedom in recent years.

Human rights observers have raised concerns that the restrictions go against the right of Iranian citizens to free expression and free assembly. Telegram is one of the few remaining spaces for open and frank dialogue in Iran, which implements some of the toughest restrictions on the flow of information worldwide.

Regulation of Telegram has been on Iran’s ICT agenda for some years; in 2015 a committee identified the application’s encrypted “secret chats” as a risk to national security and rules are in place to prevent circumvention of content filters via programmable “bots.” The new restrictions appear to target the platform’s large group conversations, used by protesters to mobilise and express political discontent.