Disruptions have been registered across Charleston, Goose Creek and Summerville in coastal South Carolina as of 10:30 a.m. UTC (6:30 a.m. local time) Thursday 5 September 2019 with residents reporting flooding and power outages.

A sudden network outage event has been detected at #MyrtleBeach, South Carolina at 10:40 a.m. UTC (6:40 a.m. local time) with videos of a possible #tornado touch down emerging on local news as Cat 3 #HurricaneDorian approacheshttps://t.co/2YBmuZE9LO pic.twitter.com/1PzRDsNYLx

North Carolina is also reporting outages while Virginia is braced for impact. Despite the storm’s abating force, winds remain strong and surges are causing flooding in low lying areas.

Through recent days network observations have been used to assess the technical impact and geographic extent of Hurricane Dorian since the storm impacted the Bahamas on Sunday, revealing extensive, lasting damage to infrastructure while Dorian battered the Abacos and Grand Bahama. The Bahmian health minister reported several casualties while areas in the direct path of the storm have been rendered uninhabitable.

In 2018, NetBlocks reported on the network impact of Hurricane Florence as it tore through North Carolina and in 2017 the mapping system was deployed to map Hurricanes Harvey and Irma. 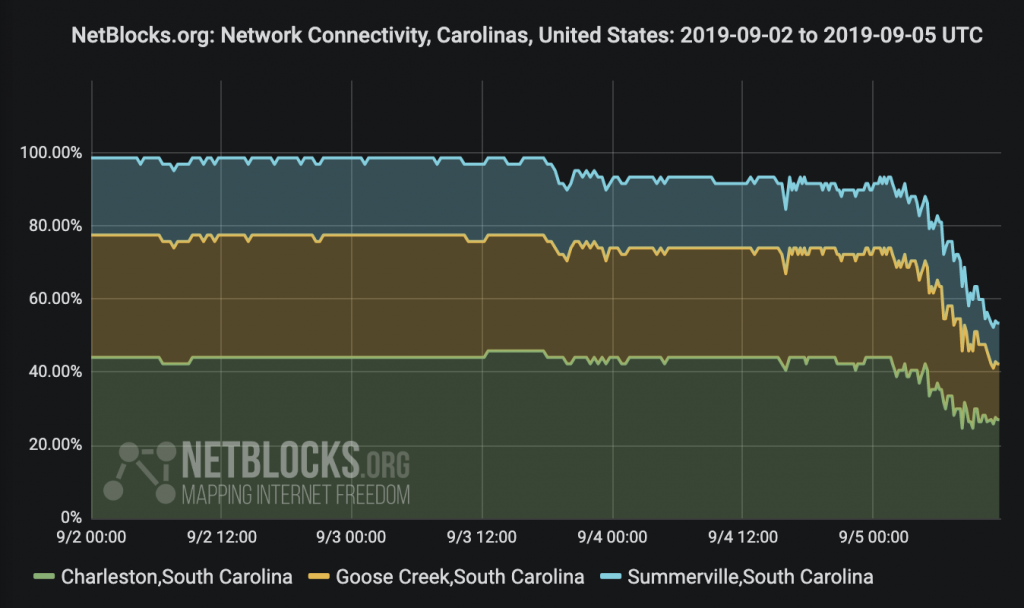