Live observations are being used to assess the technical and geographic impact of Hurricane Dorian, to trace the storm’s progress and to gauging the resilience of online emergency response mechanisms in affected states. Detections commence Sunday as critical infrastructure in Hope Town falters from 12:30 a.m. UTC:

⚠️Alert: Hurricane #Dorian has started to knock out internet infrastructure across the #Bahamas as the Category 5 storm approaches #Abaco with devastating 180 mph winds

Abaco Islands network connectivity falls to register below 6% in some areas as of 4:00 p.m. UTC:

The outages are attributed to a combination of localized residential power cuts, identified by the gradual fall in the chart in the earlier hours of the day, as well as wider infrastructure disruptions that have caused the more abrupt declines in connectivity.

Update – 6:40 p.m. UTC: Hope Town has fallen off the internet in large part, with real-time network data showing 0% connectivity amid reports of  a “direct hit” from Hurricane Dorian.

Little to no information currently appears to be emerging from affected areas online, with social media accounts that had been covering the island town now silent:

Torrential rain and storm surges are expected last for days, potentially progressing to impact millions in the U.S. along the Southeast coast from Florida to North Carolina.

Various online emergency resources appeared to be overloaded by user traffic for parts of the day, with edge measurement data showing South Carolina’s SCEMD information site becoming slowing to access for a period of approximately one hour after the announcement of mandatory evacuation plans:

Online emergency resources appeared to be overloaded by user traffic for parts of the day, with network data showing South Carolina's @SCEMD information site slowing for ~1hr after the announcement of Hurricane #Dorian mandatory evacuation plans⏱

Authorities have been using multiple channels aside from their official websites, including social media, mobile apps and broadcast in order to communicate evacuation measures:

We appreciate your patience while we work through technical difficulties on our websites. Below is a map of the area's evacuation zones; updates will be posted on this page. pic.twitter.com/2ycxLXKkfL

Update: A severe telecommunications outage has been registered in Freeport at 2:00 a.m. UTC (10:00 p.m. Sunday local time) as Hurricane Dorian makes landfall on the eastern end of Grand Bahama amid widening power cuts:

Update: A sharp drop in connectivity has been observed as of 7:30 a.m. UTC (3:30 a.m. local time) affecting Grand Bahama Island and having nationwide impact:

In 2018, NetBlocks reported on the network impact of Hurricane Florence as it tore through North Carolina and in 2017 the mapping system was deployed to map Hurricanes Harvey and Irma. 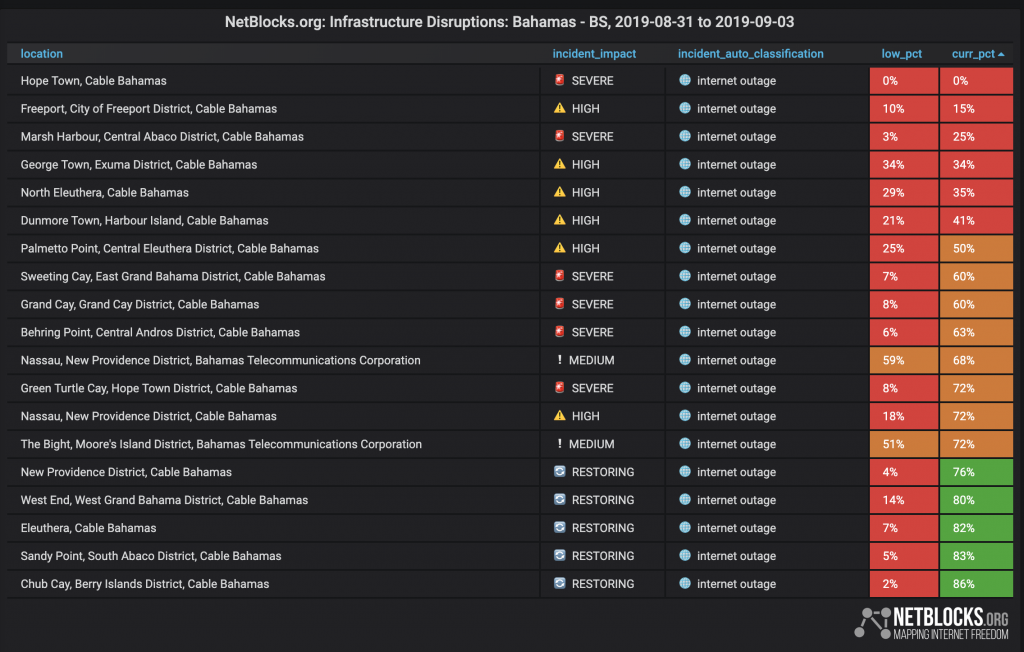 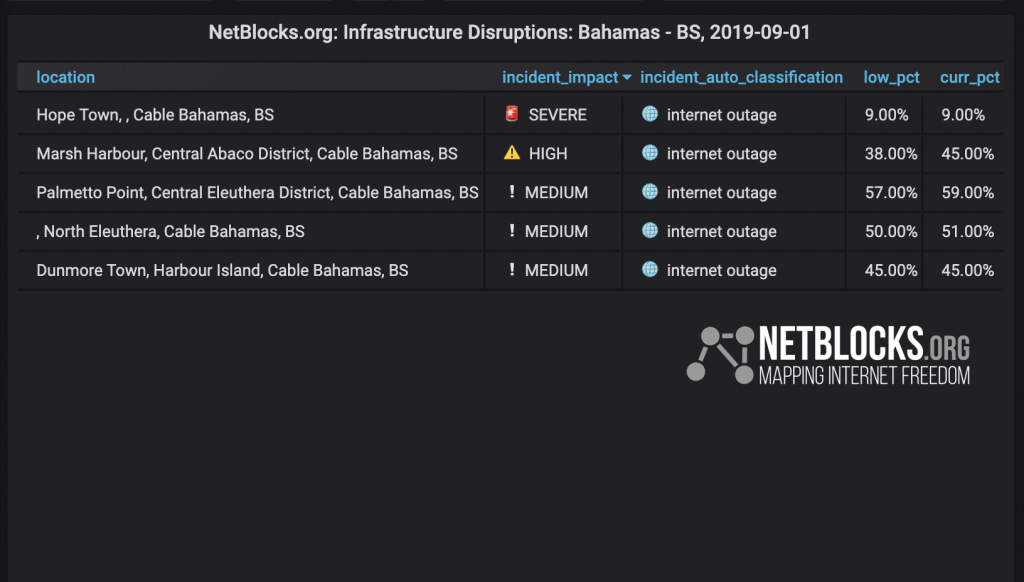