Twitter has been blocked in Venezuela from 12:50 PM UTC on state provider CANTV (AS8048). The reason for the outage, which lasted until 13:30 PM, is not yet known and many services that are frequently blocked were unaffected in this instance, although Soundcloud was also restricted. Twitter has not been subject to censorship during past filtering incidents, raising concerns of a new front for online platforms in the country.

Confirmed: For the first time during the crisis, #Twitter has been blocked in #Venezuela as of 12:50pm UTC (8:50am VET); incident duration 40 minutes; reason unknown #KeepItOnhttps://t.co/0GoBnkQJlb pic.twitter.com/ZKsHBvmoLw

The current report is based on 61,000 network measurements taken in Venezuela on Wednesday, 27 February 2019 by the NetBlocks internet observatory. Users report being able to circumvent the censorship using VPN tools, and the platforms remain available outside Venezuela.

The Soundcloud audio streaming service is currently restricted, and many have linked the Twitter incident with a tweet posted in the early hours of the morning by National Assembly president Juan Guaidó liking to Soundcloud. Guaidó has been a frequent target of state censorship during the ongoing crisis.

Another possibility is the walkout by several delegates at the UN Human Rights Council meeting in Geneva during a controversial speech in support of incumbent president Maduro. 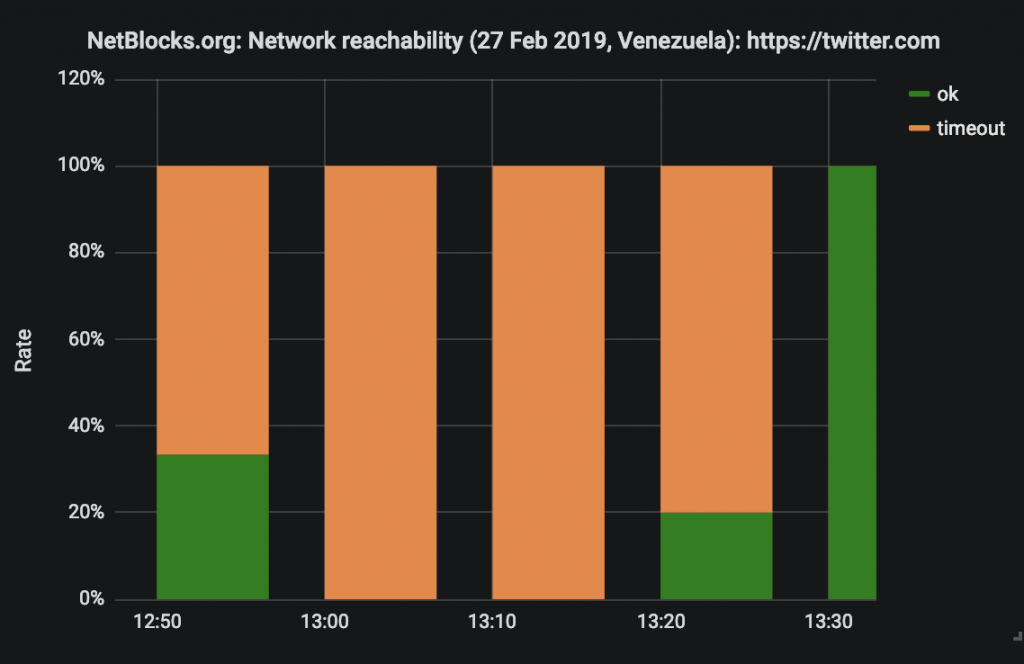