NetBlocks metrics confirm a nationwide disruption to internet service on multiple providers across Sierra Leone from the morning of Wednesday 10 August 2022. Internet was cut for two hours at noon, and then again overnight, amid reports of protests and clashes between the police and protesters in capital city Freetown and other areas. Authorities subsequently denounced an attempt to ‘overthrow’ the government and imposed a nationwide curfew.

⚠️ Confirmed: Real-time network data show that #SierraLeone is in the midst of a near-total internet shutdown amid anti-government protests in #Freetown; metrics indicate national connectivity at 5% of ordinary levels; incident ongoing 📵

Real-time network data show the near-total internet blackout coming into effect on mobile and fixed-line internet providers by Wednesday noon in a pattern consistent with an intentional disruption to service, corroborating user reports of outages in multiple cities.

⚠️ Update: Service is being restored after an overnight internet blackout in Sierra Leone, the second registered amid anti-government protests. The incidents are likely to limit the flow of information as authorities impose a nationwide curfew.

National connectivity is observed at just 5% of ordinary levels as of Wednesday afternoon. The disruption impacts most internet users in Sierra Leone and is likely to significantly limit coverage of events on the ground. This class of disruption cannot be readily circumvented through the use of VPN services.

Videos emerged showing violent confrontations between security forces and demonstrators, whose protests are sparked by rising prices, hardship, and a faltering economy.

The National Cybersecurity Coordination Center of Sierra Leone subsequently issued a notice of imprisonment terms between ten and twenty years in relation to information shared online “to destablilize the State”:

⚠️Update: A day after a nationwide internet shutdown and curfew amid protests, #SierraLeone has issued a notice against "acts of cyberterrorism", namely the spreading of "information on social media platforms to destabilize the State" 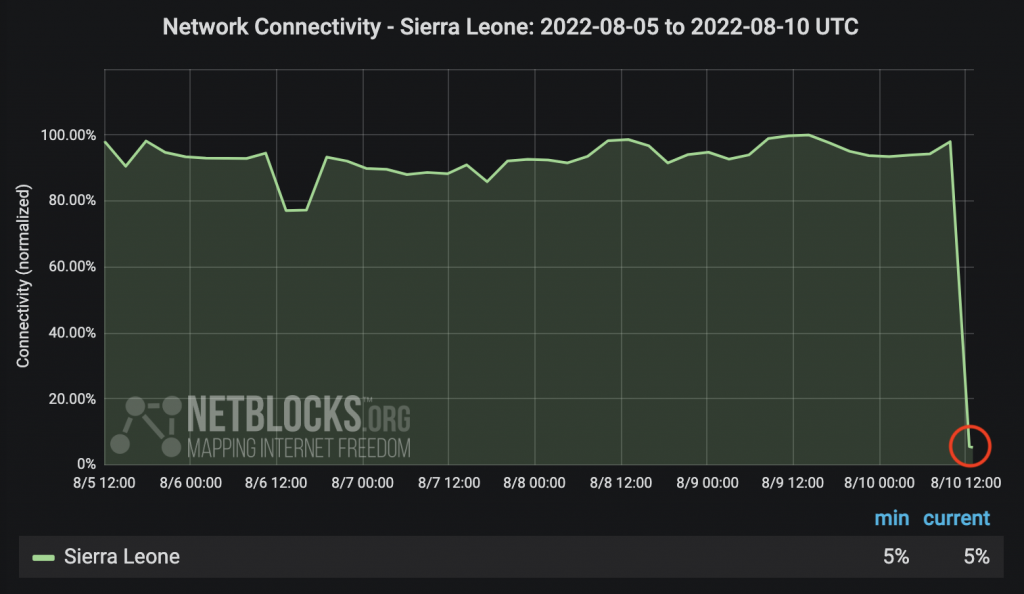