Network data from the NetBlocks internet observatory confirm that Turkey has fully restored access to the Wikipedia online encyclopedia as of 15 January 2020, exactly 991 days after the popular online resource was blocked nationally.

Update: Real-time network data show access to #Wikipedia has now been restored for almost all users in #Turkey following gradual reconnection. The popular online encyclopedia was blocked for 991 days due to content found objectionable by the state 📈

Technical data show that all editions of Wikipedia became accessible with multiple internet providers for a signifiant proportion of users at 10:30 p.m. on Wednesday evening, while a small number of users received access earlier in the day. The site subsequently became fully available via major internet service providers by 11:00 p.m. local time.

The process of fully lifting a ban is known to take several hours. Conflicting news reports earlier in the day sparked confusion when users found the blockade had not yet been lifted via their own home connections and mobile data.

At the end of last year Turkey’s Constitutional Court ruled that the blocking of Wikipedia was a violation of freedom of expression. Restoration has been widely anticipated following its publication in the Official Gazette, which publishes new legislation and official announcements. Compliance with the court ruling has now been confirmed.

We’ve been blocked in Turkey for nearly 3 years. Today, the Turkish Supreme Court ruled the ban on @Wikipedia is unconstitutional. A tremendous victory for people in Turkey and for the right to knowledge. 🇹🇷🇹🇷🇹🇷🇹🇷🇹🇷🇹🇷🇹🇷🇹🇷🇹🇷🇹🇷🇹🇷🇹🇷https://t.co/DspPuIROEQ

Internet rights group Turkey Blocks first reported the block on April 29 2017, establishing technical evidence of a nationwide restriction in the absence of a court order or official notice. After the initial blocking, authorities explained that the entirety of Wikipedia was restricted because attempts by state officials to amend specific articles via the platform’s own editorial process and legal demands had both been unsuccessful.

The site uses TLS encryption to enforce HTTPS security, an industry standard that provides user confidentiality and makes it impossible for governments to censor individual web pages. Hence, network operators blocked the entire platform in order to comply with the order. The sites were blocked with a combination of SNI filtering and DNS poisoning at the ISP level, with each telecom operator responsible for technical implementation of restrictions.

Confirmed: All editions of the #Wikipedia online encyclopedia blocked in #Turkey as of 8:00AM local timehttps://t.co/ybFolRmsOs pic.twitter.com/hI9tn4bHe5

Wikimedia Foundation chapters around the world welcomed Turkish users back to the platform.

Finally! Welcome back to Wikipedia! https://t.co/9vTHQxZpcg

Although access was possible by use of VPN services through the duration of the block, Wikipedia’s own anti-vandalism filters prevented users editing via VPN effectively turning the service into a read-only platform for those who found a way to get through.

The Catalan Wikimedia chapter welcomed the restoration that has spanned three years, cautioning that new laws could cause a similar situation in Spain: 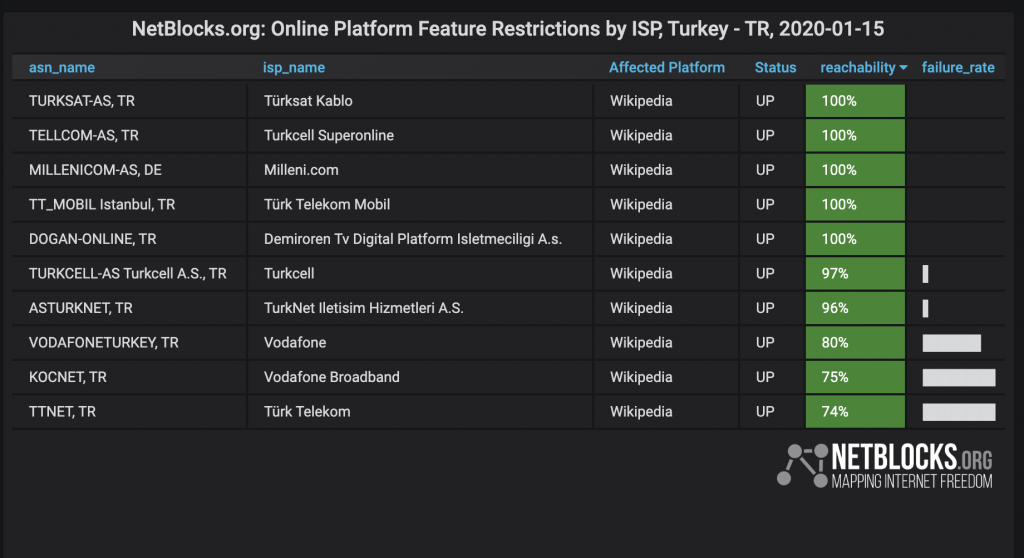