PAKISTAN – The NetBlocks internet observatory project in coordination with the Digital Rights Foundation has collected evidence of blocking of a political party website, operated by the Awami Workers Party, in the run up to general elections scheduled on the 25th of July 2018.

The extensive study conducted on Sunday 3 June 2018, spanning 73 autonomous networks and comprising some 10,000 measurements using network digital forensic techniques reveals that the political party’s website has been blocked by most, but not all, Pakistani internet service providers throughout the country. Both the TLS-secured https edition and standard http edition of the party’s website were found to be affected.

Providers implementing the block, which has been criticised on human rights grounds as a violation of the right to free expression and right to political speech during the pre-election period, include national provider PCTL, Wateen and Nayatel.

A further breakdown of the providers identifies which Pakistani ISPs are now restricting their customers from accessing the political party’s website:

The data provides comprehensive evidence of the extent of the blocking measures that is consistent with internet filters seen in Pakistan and other countries that use internet controls to restrict access to information.

The measurements were made using the NetBlocks web probes measurement technique, which uses the vantage points of volunteers based inside and outside the country to build a comprehensive view of reachability of online properties. 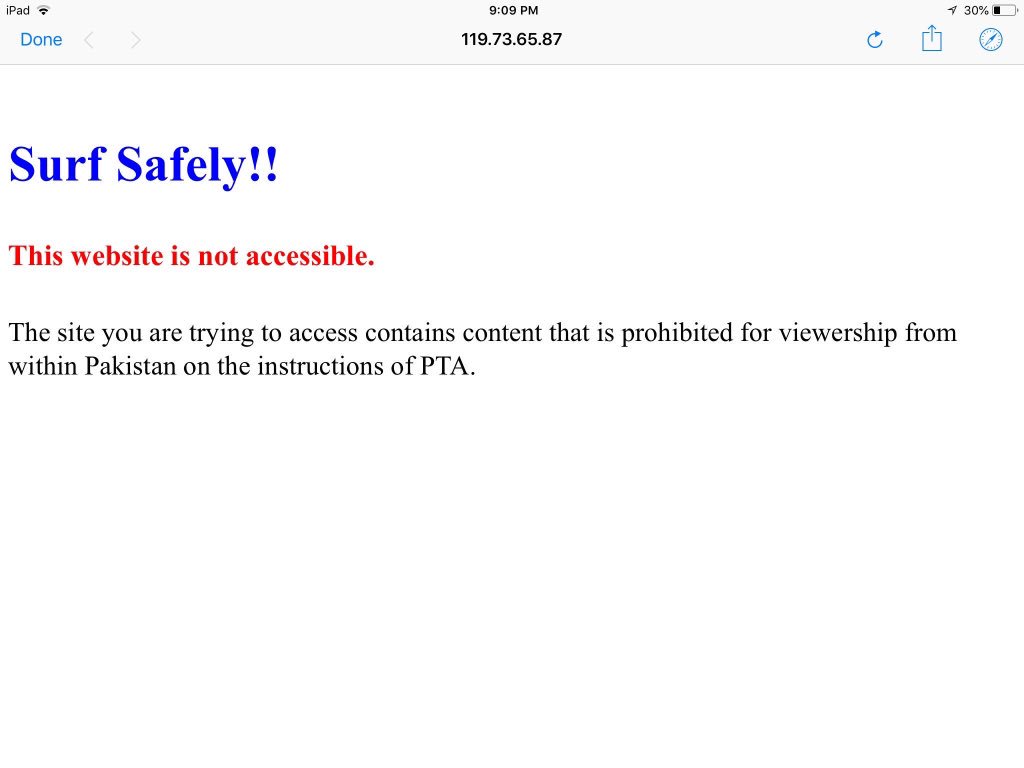 Block pages from different providers reveal different messages and justifications for the restriction, with some citing restrictions from the Pakistan Telecommunication Authority and telling users to “Surf Safely.”

Commenting on the results of the study, Nighat Dad, founder of the Digital Rights Foundation explained:

“This kind of blocking is a violation of Article 19 of the Pakistan’s constitution and ICCPR which is signed and ratified by Pakistan. We are concerned that blocking of online political content will impact the essence of free and fair elections in Pakistan. We will continue to monitor and catalogue these violations together with our partners at NetBlocks.”

Today #Pakistan blocked a political opposition party website just weeks before upcoming general elections. Together with @DigitalRightsPK we are publishing evidence revealing the nature and extent of the restrictions: https://t.co/Dh9cZD0rv4 pic.twitter.com/6ERR6T0mMJ

Our quick study with the support of @netblocks reveals the extent of Awami Workers political party website block in Pakistan. We are concerned on banning of political content right before the elections https://t.co/OFyDdqBWWV @AwamiWorkers #GeneralElections2018 #InternetFreedom pic.twitter.com/uRoSdmo4QY

NetBlocks.org is a global network observatory that monitors Internet shutdowns, network disruptions, and cybersecurity incidents and their relation to elections, geopolitics and international security in real-time.

Digital Rights Foundation (DRF) is a research and advocacy NGO based in Pakistan that focuses on how ICT can support human rights, democratic processes and digital governance. It works towards a world where all people, and especially women, are able to safely exercise their right of expression.