Network data from the NetBlocks internet observatory confirm cellular and fixed-line telecommunication networks have been impacted after a 6.5 magnitude earthquake which struck eastern Turkey Friday 24 January 2020.

Network data show a fall in connectivity on autonomous networks operated by Vodafone, Turk Telecom and Turkcell Superonline in the cities of Elazig and Malatya as the earthquake struck, 8:55 p.m. local time (17:55 UTC).

While Elazig is most affected, outages are also recorded in and have been widely reported in the neighboring city of Malatya:

Earthquakes and tremors can have impact on data transit as well as the edge of the network for a variety of reasons.

Data indicate damage to infrastructure from the tremor could have played a role in the outages affecting Elazig and Malatya, given that outages are observed on fixed-lines as well as cellular networks, although official incident reports have not yet been issued. In the aftermath of the earthquake, authorities urged citizens to avoid non-essential calls while some mobile operators offered free data packages to residents.

On the other hand, telecommunication outages during the recent earthquake in Puerto Rico were attributed to power grid failures that affected most of the island:

Telecommunication disruptions during earthquake are associated with fixed-line connectivity in these scenarios, however mobile connectivity is often impacted.

In September 2019, NetBlocks tracked another partial internet disruption in Turkey caused by a 5.7 magnitude earthquake which primarily affected mobile networks: 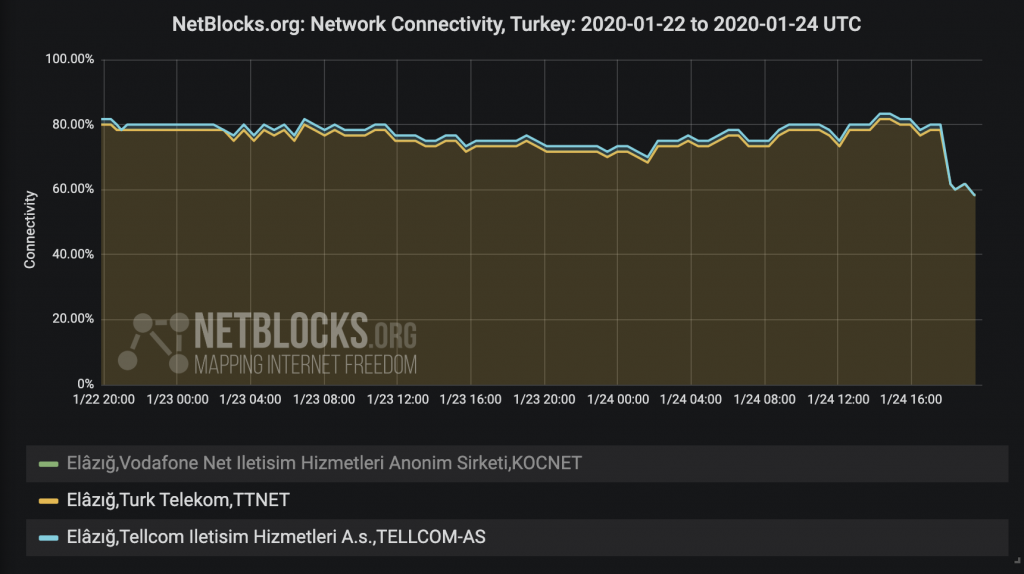