Analysis of 100,000 worldwide network measurements across 21 Facebook, WhatsApp, Instagram and Messenger servers shows no evidence of a widespread network layer fault, and no obvious signs of a DDoS attack that might explain Wednesday’s global outages.

Analysis of 100,000 worldwide network measurements across 21 Facebook, WhatsApp, Instagram and Messenger backend/frontend servers shows no evidence of a network layer fault nor signs of a DDoS attack #FacebookDown ⬇️https://t.co/l5OJWR3LMO pic.twitter.com/gdGM0s8xxE

Data collected by the NetBlocks internet observatory covering the performance and availability the platforms’ CDN, backend and frontend servers point toward a possible issue in backend or database systems within Facebook’s own internal network, which all four services rely on.

The timings do show a fall in latency from around the time access issues became widely reported — a sign that usage of the services fell significantly during the evening of 13 March manifesting in reduced round-trip times.

Distributed denial of service (DDoS) attacks are typically preceded by an increase in latency and outages, of which there is no obvious sign in the dataset, which covers three days up to the present.

The findings are consistent with user reports, which show that the sites can generally be accessed but present error messages.

The outages come weeks after Facebook announced plans to merge the platforms, raising concerns over the risks of centralization and concentration of social media platforms.

Facebook has not yet released a detailed public incident report. 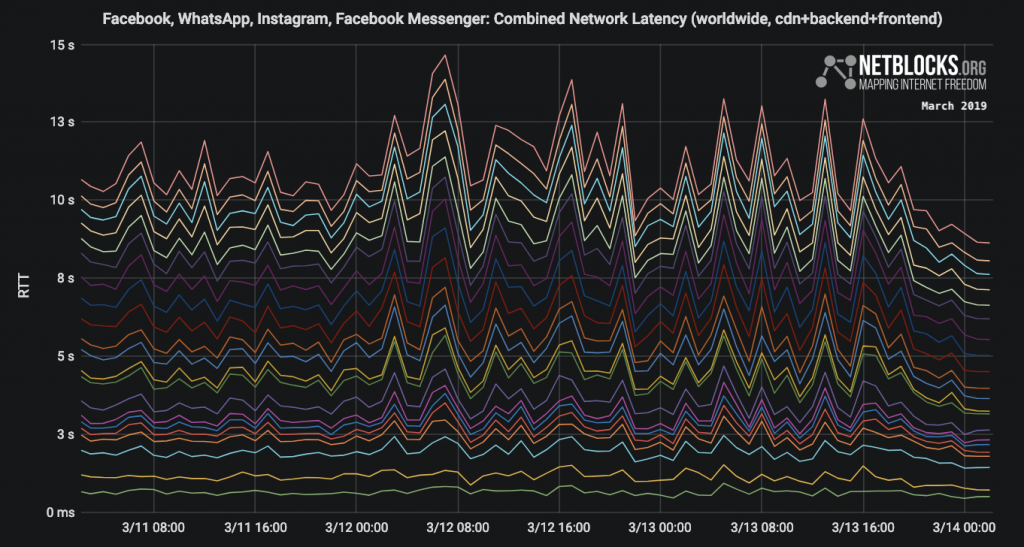 Update: 3:00 PM 14 March 2019 UTC: Network measurements from across the US show a large spike in latency across Facebook online properties at 11 AM UTC (4 AM PDT) this morning. The cause of the new incident unclear but indicates that problems are ongoing, as users continue to report difficulty using the services:

Update: Network measurements from across the US show a large spike in latency across Facebook online properties at 11 AM UTC (4 AM PDT) this morning; cause of incident unclear #FacebookDown https://t.co/l5OJWR3LMO pic.twitter.com/iNltdgtXTH