Network data from NetBlocks confirm a significant disruption to mobile internet connectivity in Burkina Faso from around 10:30 p.m. UTC Saturday 20 November 2021 affecting cellular service. The incident comes amid political unrest and the shooting of protesters by a French military convoy on Saturday.

Metrics corroborate user reports of mobile data disruptions on providers including Orange (AS37577). The data blackout is ongoing as of Monday and is likely to limit the free flow of information online and suppress news coverage of events on the ground.

⚠️ Confirmed: Mobile internet has been disrupted in Burkina Faso since Saturday night.

This class of internet disruption cannot be worked around with the use of circumvention software or VPNs. Fixed-line and wifi services appear largely unaffected by the disruption, although most users are reliant on mobile phones.

Metrics confirm that service was cut ~10:30 p.m. on Saturday night.

The incident comes amid heightened political tensions and is likely to limit news coverage of events.

Several protesters were injured on Saturday after French soldiers fired shots into a group of civilians, stoking anger against France’s military presence in the country.

Burkina Faso has been facing growing security challenges in recent years. Protesters called for the president to take action or step down earlier in the week week.

Service providers and the government initially refused to acknowledge the mobile disruption.

However, on Monday 22 November the Ministry of Communication and Relations with Parliament formally acknowledged the shutdown, presenting and order for services to be cut for 96 hours beginning Saturday night. On Wednesday 24 November, the order was extended for a further 96 hours.

Service was cut on Saturday night and was due to resume earlier today. The information blackout comes amid anti-government protests. 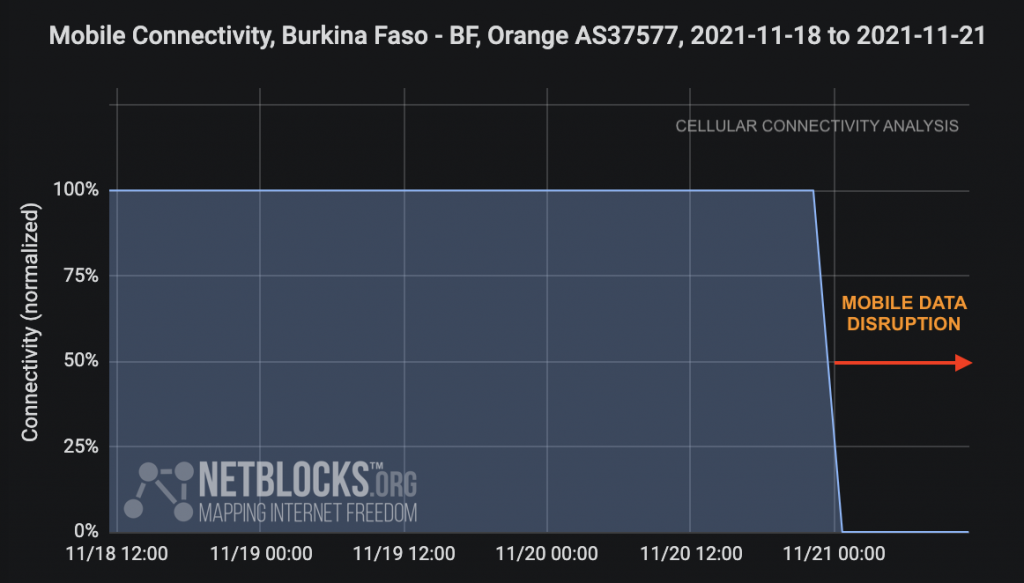