Network data from NetBlocks confirm a nation-scale collapse of internet connectivity in Yemen on Friday 21 January 2022 from around 1 a.m. local time. The incident came amid reports of an airstrike on a telecom hub in the port city of Al Hudaydah and continued until early Tuesday morning, with a recorded incident duration of four days.

ℹ️ Confirmed: Internet is being restored in #Yemen after a four-day long nation-scale blackout 📈

Real-time metrics show the loss of connectivity on leading network YemenNet (AS30873) on early Friday morning. It is not known if telecommunication infrastructure was specifically targeted, although visual investigations suggest this may be the case. The resulting information blackout is likely to limit coverage of events on the ground.

Visual reports appeared to corroborate initial reports of a strike. Al Hudaydah is the main landing point for internet connectivity in Yemen, hosting the undersea FALCON and SEA-ME-WE 5 cables that route via the Red Sea.

⚠️ Update: It's now Monday in #Yemen where a near-total Internet blackout has entered its fourth day ⏱

The country fell largely offline after a series of deadly airstrikes, leaving friends and family out of touch 📉

⚠️ Update: It's now Sunday in #Yemen where Internet has been largely down for more than 48 hours after a series of deadly airstrikes knocked out connectivity.

Work is ongoing to investigate the circumstances surrounding the network disruption. 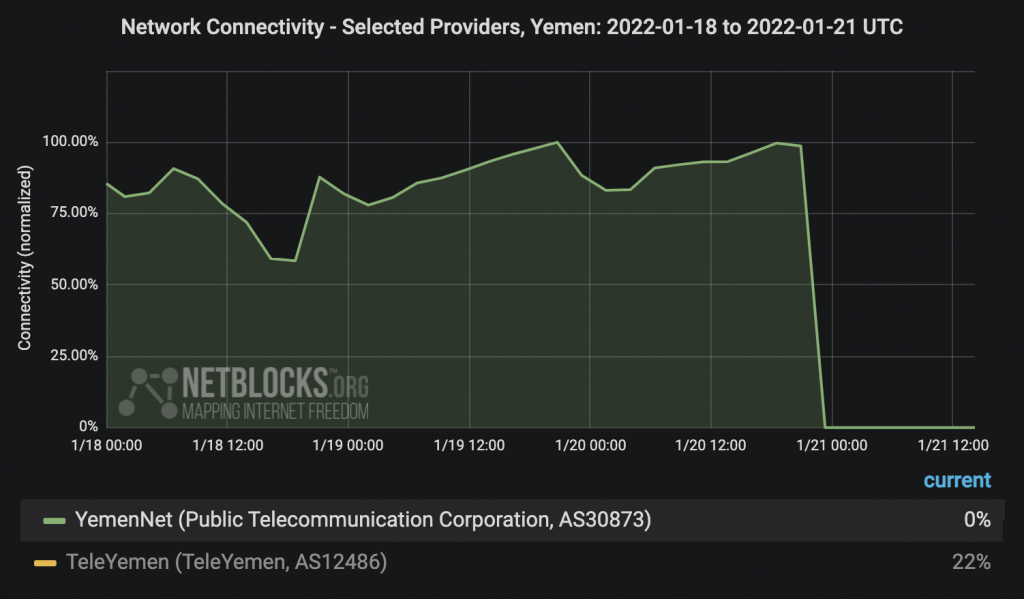